New shirts are available in the STORE now!

Hey Everyone! Big house concert show coming up THIS SATURDAY, September 12 AT MY HOUSE. Kickoff event for the 832 concert series which formally commences on October 9. Come one, come all—it's free! (but donations for 832 will be accepted and tickets for future shows will be on sale)

Go to the SHOWS page for more info.

I took my Nur Ein X songs and released them as the EP MY NAME IS FRANK. It's streaming on Spotify NOW!

Hey Everyone. It's songwriting season and I have two new songs for you to check out. Click on the new "album" called Nur Ein X. Check back next week for a new song!

Here's a video of my recent SongFight Live! performance in Washington, DC. I had just returned from France the night before and I am obviously quite tired—I don't remember ever being this relaxed about a performance. It was actually kind of nice. Original FBF band member(!) Ben Sabol on guitar and John Nolt on bass and backing vocals. Enjoy!

FBF now on Spotify and iTunes!

Exciting News! My 2003 album Smile If You Absolutely Have To is now available on Spotify and iTunes.

Hey Everyone, it's summer so I figured I better get out there and start playing again. Just added three shows in August at the Pillar Lounges in Reading (3rd and 24th) and Lancaster (23th). I'm also at Rachel's Cafe on August 16th and in Austin, Texas on August 10th. Come on out!

Hey FBF Fans! It's songwriting season, aka the annual Nur Ein competition! Will I repeat as champion this year, making me the only contestant to win three times? Who knows? But I did win Round Zero (the qualifying round) with a new, hastily recorded song called "When the Time Comes." Check it out in the "Music" section under Nur Ein 8 (2013)!

Check out the Music section for a new collaboration between Frankie Big Face and ADD. The two artists have come together to record the first ten songs of Beck's new sheet music collection Song Reader. One track per day will be posted beginning January 27.

Here's a stream of the tracks released to date:

Maybe you're new to Frankie Big Face and need a primer. Or maybe you heard a song at a show but have no idea what year it's from or what album it's from and can't find it on this website. Don't worry! With the new Frankie Big Face Song Index, you can download the "Top 20," expand your listening to the 45-song "Greatest Hits" list or browse the all-inclusive 107-song "Song Index." Just click here to get started!

Moved the website to the root level (finally) so the URL won't say "newwebsite_html" forever. Please let me know if you find any broken links!

Next up, a song index and fixing the "stream all" links.

Spent the weekend prepping "canvases" for #Albumfight. Haven't recorded a note yet but song structures are in place. 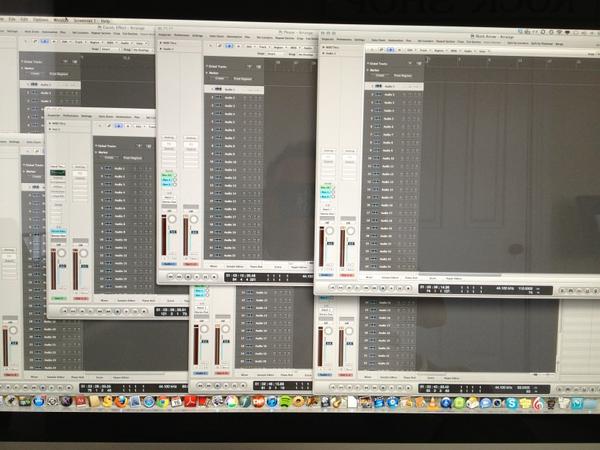 After three years of not updating my website (pathetic, I know), I've got a new website. Thanks to my good buddy Spud (who designed Spud's Amazing Web Machine--see the Links section for details), all your favorite Frankie Big Face songs are now available in a stylish new package worthy of a two-time Nur Ein champion. If you want to show your support, head on over to the Frankie Big Face store and pick up the first ever Frankie Big Face t-shirt!

Now back to writing some songs!